Visiting the mining site of Lanestosa 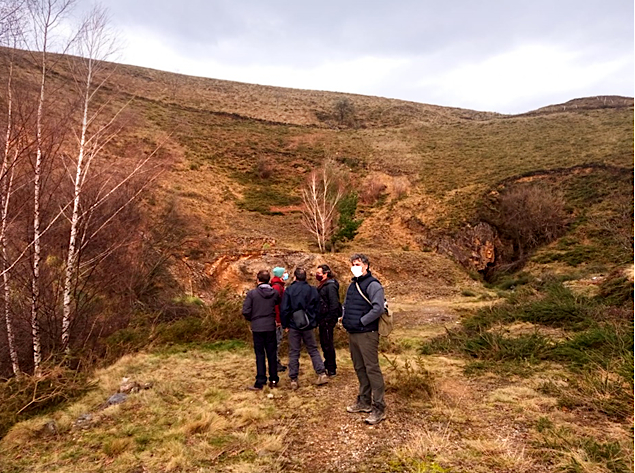 On 21 January 2021, members of EKOFISKO Research Group (Dpt. Plant Biology and Ecology, UPV/EHU, Leioa) and Botanical Garden of Olarizu (Center for Environmental Studies, Vitoria-Gasteiz) visited the mining site located in Lanestosa (Western Biscay district, Basque-Cantabrian Basin, northern Spain, 43o 13’N; 3o26’W) within the project Phy2SUDOE framework. The principal aim of this visit was recognize the potential diversity hotspots of metallicolous plants. Taking into account the native plant species previously identified by Barrutia et al. (2011) in the same study site, samples and pictures of some of the most representative plant species were taken for a botanical research. We visited locations of previous studies carry out in this emplacement. The visit was also useful to establish a preliminary design, planning and coordination of actions to be carried out during 2021.

The Pb-Zn mine is located in a remote mountainous area and includes open pits, piles of waste rock and overburden surfaces, tailing dams, and degraded parts affected by mining subsidence. The diverse nature of previous activities at the site has resulted in a heterogeneous contamination of rhizosphere soil, which frequently presents elevated Zn and Pb concentrations, and to a lesser extent of Cd. Soil Zn concentration can range from 54000 to 64000 mg kg-1 with an average of 58900 mg kg-1. Meanwhile, rhizosphere Pb concentration typically ranges from 18400 to 22500 mg kg-1 with an average of 20500 mg kg-1. The mining activity in later years was focused on the extraction of Pb by open cast mining and ceased in the late 1970s (Barrutia et al., 2011). The study area has a temperate climate characteristic of the Atlantic Region of the Iberian Peninsula (mean annual temperature, 11-15°C; mean annual rainfall, 1000–2000 mm y-1).

Despite the high concentrations of metals and low nutrient availability, spontaneous vegetation succession, has taken place in this post-mining area. After our visit we could confirm previous observations. Thus, the most frequent association is that formed by Festuca rubra –red fescue– (metal excluder and the most abundant species in the mine) and Noccaea caerulescens –alpine pennycress– (formerly, Thlaspi caerulescens; metal hyperaccumulator). This plant consortium is often accompanied by Jasione montana –sheep’s-bit– (metal accumulator) and/or Rumex acetosa –sorrel– (metal indicator), and less often by Plantago lanceolata –plantain– (metal excluder). In the boundaries of the studied site, where the influence of mining activities is apparently lower, the dominant species are Ulex europaeus –gorse–, Pteridium aquilinum –eagle fern– and Molinia caerulea –purple moor-grass–.

The tasks within the Work Package 3 (WP3) of the Phy2SUDOE project is to update and complete the floristic catalogue and evaluate the seasonal variation on plant composition and diversity in Lanestosa mine. This task will be carry out by CEA group, led by Agustí Agut. Identification of strategies of metal accumulation of metalicolous populations to be potentially used for phytoremediation and ecological restoration will be done by EKOFISKO group, led by Dr. Txema Becerril. The rhizosphere microbiome of plant species will also be evaluated in terms of phytoremediation efficiency and germoplasm preservation, by the Group of Microbial Ecology of Neiker, led by Dr. Carlos Garbisu. Finally, the members of Cell Biology in Environmental Toxicology (CBET) Research Group (Dpt. Zoology and Animal Cell Biology & Plentzia Marine Station) guided by Dr. Manuel Soto, on their behalf, will be conduct an exploration of the mining site for the identification of predominant invertebrate species.