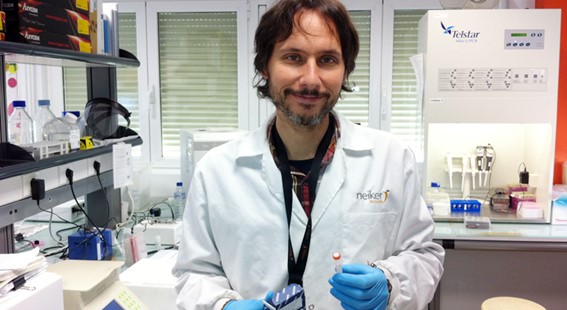 One of the objectives of PHY2SUDOE is to implement strategies for the conservation of the endemic biodiversity typical of some contaminated sites (e.g., metallurgical flora, bacteria, etc.) due to their intrinsic and utilitarian value. As part of this objective, Portuguese Catholic University and NEIKER are working on the isolation and characterization of bacteria from metalliferous environments according to their capacity to promote plant growth (PGPB).

Between the characteristics of promotion of the vegetal growth are (i) the activity ACC-deaminase (the ACC is an ethylene precursor, implied in the answer to stress in plants; the ACC-deaminase activity turns aside the use of the ACC towards the production of ammonium and α-ketobutyric), (II) the indole-3-acetic acid (the IAA is an auxin that has the capacity to stimulate the germination, growth and reproduction, as well as protecting the plants against sources of biotic and abiotic stress), (III) the production of siderophore (bacteria able to produce siderophore can increase the iron availability for the plants) and (IV) the solubilization of inorganic phosphate (the PGPB with the capacity to solubilize phosphate can turn insoluble phosphate into available forms for the plants), among others.

So far, 57 bacterial strains have been isolated from soils in the Lanestosa mining environment. Once characterized, the most promising bacteria will be stored in a biobank. Thus, they can be used in future phytoremediation or phyto-management actions.